Launched by Association of Plumbing and Heating Contractors (APHC), the inaugural Quality Plumber Week aims to recognise the diversity and range of skills plumbers have, which is often overlooked until an emergency leak or broken boiler requires attention. The week will also raise consumer awareness of using properly qualified, trained and accredited plumbers in a bid to reduce the number of rogue traders operating in the trade.

Plumbing and heating engineers work across a wide-range of specialisms from traditional pipework, boiler installations and seemingly simple plumbing work to increasingly popular new green technologies such as biomass boilers and ground source heat pumps. Yet whatever the job, quality plumbers have extensive training and experience behind them to ensure the latest regulations and safety measures are met. These legislations are constantly under review, with professional plumbing firms working hard to keep up-to-date to comply with these in order to protect their customers.

John Thompson, Chief Executive, APHC added: “There are thousands of excellent plumbers working throughout England and Wales; who provide exceptional service and advice to homes and business. Unfortunately for them rogue traders seem to grab the headlines, which tarnishes the entire industry. On behalf of not only our members, but also every hardworking plumber we want to recognise the skills and work they do.

“By supporting the week, Millside is helping to promote the invaluable work plumbers do for us all.”

Recent research commissioned by APHC found that despite 83% of homeowners stating that professional qualifications are important factor in choosing a plumbing professional, nearly half (43%) did not request information on their tradesperson’s qualifications or experience. Reasons for not checking these included embarrassment to ask for further details and trusting that credentials displayed on websites and work vehicles were correct. This trust is leaving consumers vulnerable to rogue traders, unsatisfactory work and potentially dangerous appliances.

A nursing home has been fined for breaching safety laws after an 88-year-old resident suffered nine per cent burns to her body when she was lowered into a bath of scalding hot water.

Beatrice ‘Betty’ Morgan, a resident at Greencroft Nursing Home in Aston, Queensferry, died of complications caused by her injuries a month after the incident, on 29 August 2012.

The home’s owner Greencroft Care Ltd pleaded guilty to a breach of the Health and Safety at Work Act 1974 and was fined £5,000. The judge at the hearing said if the firm had not been in liquidation, he would have sent the case to crown court, where the fine would have been at least £100,000.

Cynthia Fisher, commercial director at Inta, had this response:
Another vulnerable person has died as a result of bathtime scalding. The 88 year old dementia patient and former nurse Beatrice Morgan was lowered into a scalding bath by her carers at a care home in Deeside in August 2012, and the case against the care home has just been heard in court.

We are really saddened to hear of this tragedy – but regrettably, it was no accident. Equipment should be fitted to the bath to prevent the water being too hot. Apparently it wasn’t. We’re sure that the carers didn’t set out that morning to scald their patient, but legislation was ignored, one simple bit of kit wasn’t installed and as a result Beatrice has died.

We make anti-scald valves. They’re simple, effective and not at all expensive. If you have a care home, the law states you must have one fitted to every bath.
Flintshire Magistrates’ Court heard her injuries were a contributing factor in her death.
District Judge Gwyn Jones said standards at the home had fallen very far below the basic standards expected and staff levels did not comply with safety standards.

There was no bathing policy and improvements had not been carried out because “the company, to put it mildly, did not want to spend”, he said.
District Judge Jones said the firm “either did not care for the safety of its residents or it could not be bothered to bring the standards of the home to a minimum standard which would have prevented the potential risks.”

The District Judge is right to criticise those responsible at the care home for not doing what they should, but care homes get inspected by the Care and Social Services Inspectorate in Wales. What went wrong with their inspection? Did the inspector not notice that water in the bath could reach 50.7C (120F)? Or was it a problem with enforcement? Without being able to read the reports we can only speculate, but if a kitchen was dirty and capable of killing diners, it would be given a very short opportunity to clean up or be closed down. Why isn’t that happening with killer bathrooms?

So please, inspectors, don’t wait until someone dies before enforcing regulations. Imposing a £5000 fine on the care home operator, who has now gone out of business is no way to care for Britain’s vulnerable elderly.

Gas Safety Week is an annual safety week to raise awareness of gas safety and the importance of taking care of your gas appliances. It is co-ordinated by Gas Safe Register with support from the gas industry including retailers, manufacturers, consumer bodies and the public.

Twenty three million households in United Kingdom, Isle of Man and Guernsey use gas for heating, hot water and cooking, yet we take it for granted that our boilers, cookers and gas fires are safe. Badly fitted and poorly serviced gas appliances can cause gas leaks, fires, explosions and carbon monoxide poisoning. 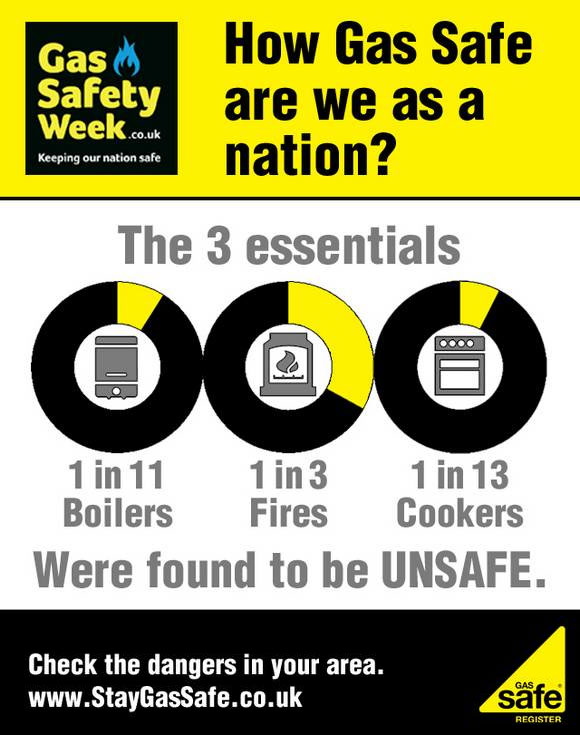 We use cookies to ensure that we give you the best experience on our website. If you continue to use this site we will assume that you are happy with it.OkSee our cookie policy